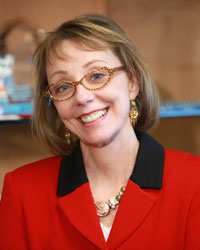 Geraldine is co-author with Japanese author Naomi Hirahara of Terminal Island, Lost Communities of Los Angeles Harbor. She retired as the Executive Director of the Port of Los Angeles on February 1, 2014 after 8 years as its CEO. Prior to that, she was Managing Director at the Port of Long Beach. Despite the commitment of a 37-year career in the maritime industry, Geraldine found time for historical pursuits. She published Long Beach's Los Cerritos in 2014. She is a Board member of the Banning Residence Museum and the Los Angeles City Historical Society.

While Director at the Port of Los Angeles, Geraldine presided over the port's 2007 centennial celebration, which led to some lasting initiatives including publication of the port's centennial book and a critical survey of the port's historical records. The findings of that study led her to establish the Port of Los Angeles Historical Archives and hire an archivist to ensure historical records were properly stored, protected and made available for public use. The archives is digitizing its over 200,000 photographs, and to date 7,000 are available online.

Geraldine received an award from Los Angeles Historical Society to recognize her efforts to preserve Los Angeles history in December 2012. She is currently a Professor of the Practice in the Schools of Public Policy and Engineering at University of Southern California and a Board member of Bank of the West Bank. In early 2016, Geraldine received a Haynes foundation grant to prepare a documented history of the Port of Los Angeles 1907-1967.

Naomi Hirahara and Geraldine Knatz are being recognized for their co-authorship of Terminal Island, Lost Communities of Los Angeles Harbor. Discover the early history of the islands of San Pedro Bay: Deadman's Island and Rattlesnake Island, which together became Terminal Island.  It's a story profoundly different than the Terminal Island of today, which stands as part of the industrial complex of the Port of Los Angeles and Long Beach. For nearly six decades, Terminal Island was home to many people living in the communities of East San Pedro, Terminal Beach, and Brighton Beach, and later the Japanese Village in Fish Harbor. Learn how it has changed over time.