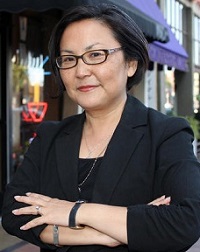 Naomi was born and raised in Pasadena, California.  She received her bachelor's degree in international relations from Stanford University and studied at the Inter-University Center for Advanced Japanese Language Studies in Tokyo.  She was a reporter and editor of The Rafu Shimpo during the culmination of the redress and reparations movement for Japanese Americans who were forcibly removed from their homes during World War II.  During her tenure as editor, the newspaper published a highly-acclaimed inter-ethnic relations series after the L.A. riots.

Naomi left the newspaper in 1996 to serve as a Milton Center Fellow in creative writing at Newman University in Wichita, Kansas.